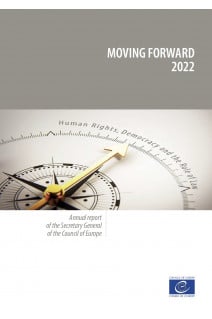 
 
“The Council of Europe was founded 73 years ago, in the wake of the Second World War and on the promise of ‘never again’. For Ukraine, that promise has not held. This is not a failure of multilateralism itself, but the result of an individual country’s violent pivot away from the values that underpin it.

Launching her annual report, Moving Forward 2022, the Secretary General condemned Russian aggression against Ukraine and praised the “grit, bravery and determination” of the Ukrainian people.

“We had dared to believe that pictures like this – realities like this – belonged to Europe’s past. We were wrong. History has returned to our continent in the cruellest of ways. The scale of the destruction and the long-term geopolitical implications are still unfolding.

“The Council of Europe is united in its solidarity with Ukraine. We continue to support the country and its people and will do so with further, tailor-made measures as soon as the violence ends. In the meantime, we are working with member states to help them support the Ukrainian refugees who have come to their countries in search of safety.”

She stressed that the Organisation’s swift suspension and subsequent exclusion of Russia had been made inevitable by its government’s actions, which have come at a cost for its own citizens, adding: “2022 will be the year in which they lose the protection of the European Convention on Human Rights, their ability to submit applications to the European Court of Human Rights and their place in this pan-European family.

“More broadly, this is a warning to all of us. What has happened once could happen again…The success of our multilateralism rests on the determination of governments to ensure that their citizens’ fundamental rights are interwoven with every aspect of life on our continent. Words and pledges at ministerial sessions matter, but they are not ends in themselves. What counts is that promises are kept, results are delivered and standards are met: that there is the political will to deliver.

“The Council of Europe was founded 73 years ago, in the wake of the Second World War and on the promise of ‘never again’. For Ukraine, that promise has not held. This is not a failure of multilateralism itself, but the result of an individual country’s violent pivot away from the values that underpin it. The lesson to be drawn, yet again, is that our success as an Organisation – and as a continent – relies on our member states’ determination to do the right thing: to invest in human rights, democracy and the rule of law as the basis of a just future.”
INTRODUCTION BY THE SECRETARY GENERAL
CHAPTER 1 – IMPLEMENTATION OF THE EUROPEAN CONVENTION ON HUMAN RIGHTS
CHAPTER 2 – FREEDOM OF EXPRESSION
CHAPTER 3 – THE FIGHT AGAINST SOCIAL INEQUALITIES AND POVERTY
CHAPTER 4 – NON-DISCRIMINATION
CHAPTER 5 – THE FIGHT AGAINST INEQUALITY, RACISM, XENOPHOBIA AND DISCRIMINATION ON GROUNDS OF RELIGION
ANTISEMITISM AND RELIGIOUS INTOLERANCE
HATE SPEECH
HATE CRIMES
EQUALITY
CHAPTER 6 – INDEPENDENT, EFFICIENT AND RESILIENT JUDICIAL SYSTEMS
INDEPENDENCE AND IMPARTIALITY
EFFICIENCY
INTEGRITY AND RESILIENCE
CHAPTER 7 – THE FIGHT AGAINST CORRUPTION, MONEY LAUNDERING AND CYBERCRIME
CORRUPTION
MONEY LAUNDERING
CYBERCRIME
CHAPTER 8 – THE FIGHT AGAINST HUMAN TRAFFICKING
CHAPTER 9 – ARTIFICIAL INTELLIGENCE
CHAPTER 10 – THE FIGHT AGAINST ENVIRONMENTAL DEGRADATION AND CLIMATE CHANGE
CHAPTER 11 – CIVIL SOCIETY, INCLUDING HUMAN RIGHTS DEFENDERS AND NATIONAL HUMAN RIGHTS INSTITUTIONS
UPHOLDING FREEDOM OF ASSOCIATION
ENSURING BETTER PARTICIPATION OF CIVIL SOCIETY
CHAPTER 12 – EDUCATION FOR DEMOCRATIC CITIZENSHIP AND YOUTH
EDUCATION
YOUTH
CULTURE AND CULTURAL HERITAGE
EUROPEAN CENTRE FOR GLOBAL INTERDEPENDENCE AND SOLIDARITY: THE NORTH-SOUTH CENTRE