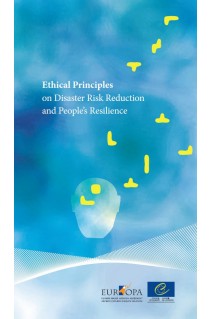 The current document is intended to deal both with the direct victims of disasters and with the other parties involved, such as public civil defence organisations, public servants of states affected by disasters and of assisting states, and humanitarian NGOs.

The aim of this document is to establish, for the whole process of dealing with disasters (from prevention measures to reconstruction, including the actual crisis period, so before, during and after disasters), what moral obligations the various parties have, local victims and rescuers alike, in the light of existing rules of general international law, and particularly those relating to international law of human rights.

Foreword
Ethical principles relating to disaster risk reduction and contributing to people’s resilience to disasters
Introduction
General principles
Solidarity
Joint responsibility
Non-discrimination
Humanity
Impartiality
Neutrality
Co-operation
Territorial sovereignty
Prevention
Role of the media
The ethical principles applied prior to disasters
Introduction of prevention measures
The importance of a good quality healthy environment
Education, training and awareness-raising about resilience to disasters
Prior information
Participation
Freedom of expression
Access to justice
Disaster prevention at the workplace
Disaster prevention in recreation and tourist areas
Disaster prevention in public places, particularly schools and hospitals
Special prevention measures for the most vulnerable groups
Organisation of and participation in emergency drills
Preventive evacuation of populations
The ethical principles applied during disasters
Humanitarian assistance
Information and participation during disasters
Compulsory evacuation of populations
Respect of dignity
Respect of persons
Emergency assistance for the most vulnerable persons
The importance of rescue workers
Measures to safeguard and rehabilitate the environment
Necessary measures to safeguard and restore social ties
The ethical principles applied after disasters
Strengthening resilience to the effects of disasters
Necessary measures
Protection of economic, social and cultural rights
Protection of civil and political rights
Appendix 1

The EUR-OPA Major Hazards Agreement has long contributed to and continues to support the global efforts on Disaster Risk Reduction, in particular the four priority areas of the Post-2015...
Price Free
More info
 Quick view