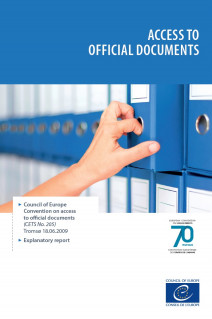 
 
The Council of Europe Convention on access to official documents is the first international treaty recognising a general right of access to official documents held by public authorities. It is based on the will of States to ensure transparency, a key element of good governance. Indeed, everyone’s access to information held by public authorities promotes an informed participation of citizens in decision-making on issues of general interest and facilitates the exercise of human rights and fundamental freedoms.

The Convention sets out a core of common standards stemming from the experiences and practices of the 47 member States of the Organisation. It provides for minimum rules to be applied in the processing of requests for access to information, a right to a remedy and additional measures, while offering the necessary flexibility to enable the national legislations to foresee more extended access to official documents. Restrictions of access are only permitted if they are intended to protect certain main interests such as national security or private life.
➢ COUNCIL OF EUROPE CONVENTION ON ACCESS TO OFFICIAL DOCUMENTS
(adopted by the Committee of Ministers on 27 November 2008, at the 1042bis meeting of the Ministers' Deputies)
➢ EXPLANATORY REPORT

Council of Europe Convention on Access to Official Documents - Council... (2009)