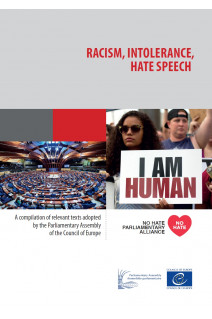 The Parliamentary Assembly of the Council of Europe has carried out impressive work in the area of combating racism and intolerance. Its adopted texts cover a range of issues, including anti-gypsyism, anti-Semitism, xenophobia and intolerance targeting migrants. Not only do these documents take stock of the situation, analysing the challenges faced by European societies, they also indicate a variety of measures to address them which should be implemented by the legislators and policy makers of the Council of Europe’s member States.

In view of the upsurge of intolerance and the emergence of new forms of racism, as observed by all the Assembly rapporteurs who have been active in this area, much remains to be done, particularly in terms of follow-up to adopted texts and their implementation in national legislation and policies.
FOREWORD
I. RACISM
Recognising and preventing neo-racism
A strategy to prevent racism and intolerance in Europe
Tackling racism in the police
II. INTOLERANCE
Promoting the inclusion of Roma and Travellers
Renewed commitment in the fight against antisemitism in Europe
Identities and diversity within intercultural societies
Migrants: ensuring they are a benefit for European host societies
III. HATE AND HATE SPEECH
The role and responsibilities of political leaders in combating hate speech and intolerance
Stop hate speech and acts of hatred in sport
Ending cyberdiscrimination and online hate
Counteraction to manifestations of neo-Nazism
Terrorist attacks in Paris: together for a democratic response

PDF - Bookmarks - A manual for combating hate speech online through... (2020)

This revised edition of Bookmarks reflects the end of the coordination of the youth campaign by the Council Europe. The campaign may be officially over, but the education and...
Price 7.00 € / 15.00 $US
More info
 Quick view

PDF - WE CAN! Taking Action against Hate Speech through Counter and... (2017)

The right to freedom of expression entails duties and responsibilities and is subject to certain limits, provided for in Article 10.2 of the European Convention on Human Rights, which...
Price 19.00 € / 38.00 $US
More info
 Quick view

Hate speech is based on the unjustified assumption that a person or a group of persons are superior to others; it incites acts of violence or discrimination, thus undermining respect for...
Price Free
More info
 Quick view

The expression of hate speech may have a greater and more damaging impact when disseminated through the media. Situations of tension and times of war and other forms of armed conflict...
Price Free
More info
 Quick view

The NO HATE SPEECH MOVEMENT is a Europe wide campaign, devised by young people in the Council of Europe, to raise awareness of hate speech online, and to combat it. A campaign of...
Price Free
More info
 Quick view

The aim of this publication is to contribute to a wider understanding of the concept of hate speech, to offer a starting point in terms of providing recommendations and mechanisms for...
Price Free
More info
 Quick view

PDF - Guidelines for Educators on Countering Intolerance and... (2015)

Intolerance and discrimination against Muslims are not new phenomena. However, they have evolved and gained momentum in recent years, particularly under conditions of the “war on...
Price Free
More info
 Quick view

Blasphemy, insult and hatred - Finding answers in a democratic society... (2010)

Mutual understanding and acceptance is perhaps the main challenge of modern society. Diversity is undoubtedly an asset, but cohabiting with people of different backgrounds and ideas calls...
Price 39.00 € / 78.00 $US
More info
 Quick view

Cyberhate: an issue of continued concern for the Council of Europe's... (2016)

Recipes for educational work do not really exist, particularly not recipes of similar value for all European societies. Youth and social workers, youth leaders and teachers most...
Price 6.00 € / 13.00 $US
More info
 Quick view

An invaluable resource for students of law, politics, international relations and technology as well as for diplomats and civil society actors, this publication demonstrates how the...
Price 29.00 € / 58.00 $US
More info
 Quick view