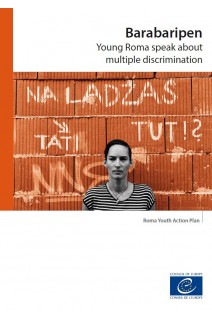 Discrimination remains one of the most widespread forms of human rights violations in Europe today and one which disproportionately affects Roma people and communities. Many Roma young people grow up with discrimination. Among them, many experience multiple discrimination because of their ethnicity and also other grounds of discrimination, such as social status, sexual orientation and gender identity, sex or migrant status. This publication aims to bring to light their situations and to provide a space for their life stories to unfold.

Multiple discrimination entered the work of the Council of Europe regarding Roma young people with the Roma Youth Action Plan, adopted in 2011. The action plan calls for the recognition and appreciation of “their [young Roma] history, plural cultural backgrounds and affi liations as young people, as Roma, as citizens of their countries and as active Europeans”. Addressing multiple discrimination and recognising plural identity affi liations is key to challenging the blindness of prejudice. A research project was launched in 2013 to acquire a deeper understanding of the situation of Roma young people who experience discrimination on several grounds. The project involved interviews and meetings with Roma young people in eight countries: Albania, the Czech Republic, Hungary, Romania, Serbia, Slovakia, Spain and the United Kingdom.

Barabaripen includes life stories of nine young Roma aff ected by multiple discrimination across Europe, an analysis of the mechanisms of discrimination and the strategies that young people use in order to tackle it. Barabaripen is also an awareness-raising and educational tool; it includes proposals for educational activities with young people using the life stories and background materials. Multiple discrimination may still be a recent concept, but its reality is deeply set in our societies. Young people themselves, by telling us their stories with their own words and emotions, represent the humanity, depth, complexity and uniqueness of each life experience.