Working with the Council of Europe: a practical guide for civil society (2022) 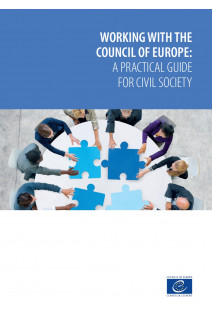 
 
At its Helsinki Ministerial session in 2019 the Council of Europe Committee of Ministers adopted the decision “A shared responsibility for democratic security in Europe: the need to strengthen the protection and promotion of civil society space in Europe.”

In response to this decision, the Secretary General made a number of proposals. Their implementation was endorsed at the Hamburg Ministerial session in May 2021.

This handbook is prepared in response to the Secretary General’s call to strengthen the role and meaningful participation of civil society organisations, and national human rights institutions in the Organisation, with the view to increasing its openness and transparency towards civil society.

The aim of the handbook is to provide a non-exhaustive overview of the many ways in which the Council of Europe works with civil society, to provide links to in-depth information and to act as a guide for how civil society can become involved in the work of the Organisation. It gives information on the different forms of access, co-operation, input, participation, and/or partnership that are possible and relevant for NGOs.

It contains a thematic index, with links to websites provided throughout the text. Further information can be found on the main portal: www.coe.int, where there is also the possibility to sign up to newsletters.