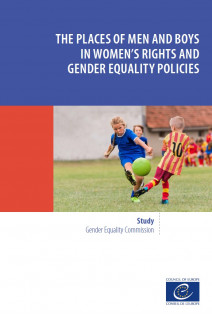 
 
“ The role of men, in both the public and private spheres, is critical to make progress towards real gender equality. Men’s and boys’ participation and responsibility as actors of change for gender equality are very important”. (Council of Europe Gender Equality Strategy 2018-2023)

The issue of gender equality concerns society as a whole and both men and women are involved. Engaging men and boys in advancing gender equality may, therefore, seem obvious, marked by the seal of modernity and the aspiration to enjoy an egalitarian society together in the future. Consequently, very often, the questions “What are we talking about?” and “Why do we do it?” are replaced by the now urgent question “How do we do it?”.

The Council of Europe Gender Equality Commission commissioned this study in order to clarify the issues at stake and to map existing initiatives and public policies in this area.
EXECUTIVE SUMMARY
INTRODUCTION
FRAMING OF THE “MEN, BOYS AND GENDER EQUALITY” FIELD
a) A place or places for men and boys?
b) Reasons for, and objectives of, public action
c) Possible risks and/or pitfalls
OPERATIONAL OVERVIEW OF ACTIVITIES RELATING TO MEN AND BOYS AND GENDER EQUALITY
1. Activities aimed at establishing an evidence base and a shared legislative and political framework
2. Activities focusing on how men and boys can impede progress on gender equality and women’s rights
3. Activities focusing on the role of men and boys’ in promoting women’s rights and gender equality
4. Activities focusing on men and boys as collateral victims of male domination
RECOMMENDATIONS
APPENDICES
Appendix 1 – List of interviews
Appendix 2 – Methodological Issues
Appendix 3 – Brief bibliography

The new Strategy, adopted on 7 March 2018, builds upon the vast legal and policy acquis of the Council of Europe as regards gender equality, as well as the achievements of the first...
Price Free
More info
 Quick view

Gender equality is central to the protection of human rights, the functioning of democracy, respect for the rule of law, and social well-being. The Council of Europe’s work in the fields...
Price Free
More info
 Quick view

Compilation of good practices to promote an education free from gender stereotypes and identifying ways to implement the measures which are included in the Committee of Ministers’...
Price Free
More info
 Quick view

Achieving gender equality and empowering all women and girls: The... (2018)

UN 2030 AGENDA AND THE COUNCIL OF EUROPE On 1 January 2016, the World started implementing the “UN 2030 Agenda for Sustainable Development”, an ambitious and universal vision, based on...
Price Free
More info
 Quick view

Over the last century, significant progress has been made in terms of gender equality in Europe. Great disparities persist in our societies, however, between girls and boys, women and...
Price 8.00 € / 16.00 $US
More info
 Quick view