A mission to inform - Daphne Caruana Galizia speaks out (2020) 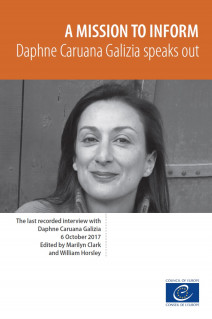 Daphne Caruana Galizia, Malta’s foremost investigative journalist, was killed on 16 October 2017 in a targeted car bomb attack near her home. Her reporting focused incisively on members of Malta’s political and business elite and allegations of corruption, money laundering and organised crime. In this interview, recorded 10 days before her death, she spoke about facing multiple defamation lawsuits and of living in a “climate of fear” because of threats and acts of violence. She characterised her situation as “one woman with a blog” against the “constant propaganda” of a powerful political machine. At the time of publication her murder remains unresolved.
NOTE ON THE ABRIDGED VERSION
FOREWORD
ABRIDGED INTERVIEW WITH DAPHNE CARUANA GALIZIA
AFTERWORD
TRIBUTE TO DAPHNE CARUANA GALIZIA BY HER SON ANDREW CARUANA GALIZIA
NOTE ON PUBLICATION

A mission to inform - Journalists at risk speak out (2020)

Freedom of expression is one of the basic conditions for the progress of society. Without safeguards for the safety of journalists there can be no free media. Journalists are under...
Price 19.00 € / 38.00 $US
More info
 Quick view

Is journalism under threat? Censorship, political pressure, intimidation, job insecurity and attacks on the protection of journalists’ sources - how can these threats be tackled?...
Price 29.00 € / 58.00 $US
More info
 Quick view

“Journalists and free media play an essential role in any functioning democracy. They must be allowed to scrutinise those in power and expose corruption. It is our duty to defend freedom...
Price Free
More info
 Quick view

Platform to promote the protection of journalism and the safety of... (2017)

Recent years have seen a decline in protection for journalists in Europe, with media actors operating in increasingly difficult environments for their safety and for media freedom. The...
Price Free
More info
 Quick view

How to protect journalists and other media actors? (2020)

Violence against journalists is on the rise across Council of Europe member States – attacks are getting more severe and include, in some cases, murders and car bombs, as well as other...
Price Free
More info
 Quick view

Protecting the right to freedom of expression under the European... (2017)