Handbook for parliamentarians - The Council of Europe Convention against Trafficking in Human Organs (CETS No. 216) (2019) 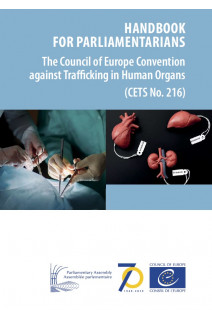 
The Parliamentary Assembly of the Council of Europe has been pushing for a Convention against trafficking in human organs since 2003. The Council of Europe Convention against trafficking in human organs is a big advance in the fight against this ghoulish crime. The Convention, adopted by the Committee of Ministers on 9 July 2014, opened for signature in Santiago de Compostela on 25 March 2015, and entered into force on 1 March 2018.

However, this Convention has been ratified by few member states so far. Although it is having an impact in these countries, organ trafficking is a highly dynamic crime: when it gets too “hot”, the criminals simply move their operations elsewhere, where the Convention is not in force. To stop this crime in Europe and beyond, a much higher rate of ratifications is needed.

This is where we, as parliamentarians, come in. We can do many things to promote this Convention: we can change laws to close legislative loopholes, we can push for signature and ensure ratification of the Convention, and we can hold the government to account to guarantee its effective implementation. This Handbook for parliamentarians has been developed to assist you in these endeavours: it provides a clear explanation of the added value of the Convention, details its provisions, and suggests myriad ways you, as parliamentarians, can help put a stop to these ghastly crimes.

Stopping trafficking in organs is something we must do. Certain things should never be for sale: our principles, our rights – and our organs.
Liliane Maury Pasquier
President of the Parliamentary Assembly of the Council of Europe
I. THE COUNCIL OF EUROPE AND THE PARLIAMENTARY ASSEMBLY
II. PREFACE BY THE PRESIDENT OF THE PARLIAMENTARY ASSEMBLY
III. OVERVIEW
The problem of organ trafficking
Action of the Council of Europe
Why a Convention?
Objectives of the handbook
Role of parliamentarians
IV. THE COUNCIL OF EUROPE CONVENTION AGAINST TRAFFICKING IN HUMAN ORGANS (CETS NO. 216)
Purpose of the Convention
Scope
Use of terms
Non-discrimination principle
Criminalisation of trafficking in human organs
Criminalisation of other forms of illicit removal and implantation
Legal status of donors and recipients
Corporate liability
Sanctions
Aggravating circumstances
Jurisdiction
Procedural law
International co-operation in investigation and prosecution
Protection measures
Prevention measures at national level
Prevention measures at international level
Monitoring mechanism – Committee of the Parties
Relationship with other international instruments
Amendments to the Convention
Final clauses

Additional Protocol to the Convention on Human Rights and Biomedicine... (2002)

Biomedicine and human rights - The Oviedo Convention and its additional... (2010)

The Convention on Human Rights and Biomedicine, also referred to as the "Oviedo Convention", celebrated the 10th anniversary of its entry into force in 2009. This legally binding...
Prix 29,00 € / 58.00 $US
Plus d'infos
 Aperçu rapide

Co-ordinated by Sir Peter Morris, President of the Royal College of Surgeons of England and former head of the Oxford Transplants Centre, "Ethical eye: transplants" raises many ethical...
Prix 15,00 € / 23.00 $US
Plus d'infos
 Aperçu rapide

Recommendation CM/Rec(2016)6 is the outcome of a re-examination of Recommendation Rec(2006)4 on research on biological materials of human origin undertaken by the Council of Europe in...
Prix 8,00 € / 16.00 $US
Plus d'infos
 Aperçu rapide

Council of Europe Convention against trafficking in human organs and... (2016)

Trafficking in human organs is an emerging criminal activity which presents a clear danger to both individual and public health, while breaching human rights and fundamental freedoms....
Prix 8,00 € / 16.00 $US
Plus d'infos
 Aperçu rapide