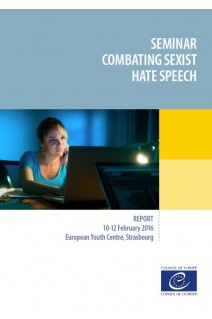 While the impact of new information technologies on all aspects of modern societies and human life has been very positive, new vulnerabilities of our societies have emerged through the growth of the Internet and social media. The No Hate Speech Movement campaign was set up to mobilise young people for human rights online and countering hate speech.

In a survey carried out in 2015, women were one of the top three target groups of online hate speech encountered by the respondents. One thematic focus of the campaign is therefore sexist hate speech. Sexist hate speech is still too often seen as “acceptable”, while in fact it is one of the most widespread and systemic forms of hate.

Women and girls receive threats and insults of a sexual character on a daily basis via emails, websites or social media, including threats of publishing personal photos and information. The aims are to humiliate and objectify women, to destroy their reputation and to make them vulnerable and fearful.

Sexist hate speech has devastating effects, especially on young women, and affects society’s quest to achieve gender equality. The Council of Europe Gender Equality Strategy has the overall goal of achieving the advancement and empowering of women and the realisation of gender equality in member states. One of its five objectives is “combating gender stereotypes and sexism”, including “combating sexism as a form of hate speech and integrating this dimension into Council of Europe action aiming at combating hate speech and discrimination (...)”.

This report provides information about the extension of the problem, examples of action and priorities for educational and political action to seriously address and stop sexist hate speech.

The NO HATE SPEECH MOVEMENT is a Europe wide campaign, devised by young people in the Council of Europe, to raise awareness of hate speech online, and to combat it. A campaign of...
Prix Gratuit
Plus d'infos
 Aperçu rapide

Sexist hate speech is a form of violence against women and girls that perpetuates and exacerbates gender inequality. Both knowledge and policy action at all levels need to be developed...
Prix Gratuit
Plus d'infos
 Aperçu rapide