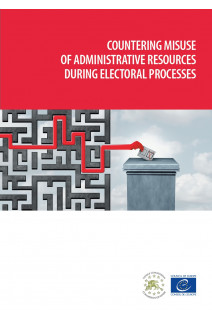 
 
Democracy requires that the law develops to identify, detect and take enforcement action against the misuse of administrative resources in the electoral process.

A competitive, fair and healthy electoral environment is crucial at every stage of the electoral cycle. However, it has utmost importance during the electoral period, including campaigns, as well as on election day. The line between a state and a ruling party is very fragile and can sometimes be blurred even in recognised democracies, which detracts from other improvements in electoral practices. The abuse of public administrative resources damages the democratic development of states and leads to citizens’ frustration with elections and their results.

The toolkit “Countering the misuse of administrative resources during electoral processes” was developed as methodological guidelines for the Council of Europe member states to introduce effective mechanisms for preventing the abuse of public administrative resources and responding to violations in a timely and efficient manner. The toolkit was designed in co-operation with the Venice Commission and is based on the Council of Europe’s acquis and the case law of the European Court of Human Rights. This publication proposes an overview of international standards and good practices, case studies and practical examples, empowering electoral stakeholders with necessary instruments for countering the misuse of administrative resources during electoral processes. The toolkit presents interesting comparative analysis of examples from Latvia, Georgia, Ukraine, the Republic of Moldova and other Council of Europe member states. The authors propose recommendations and practical solutions, as well as complex measures that are already in place and have changed electoral practices for the better. The methodological guidelines also include codes of conduct, training materials and concepts of e-learning courses in the field aimed at raising awareness of electoral stakeholders of the necessity of ensuring a fair and competitive electoral environment.

The right to free elections is one of the most difficult rights to define: while it is an objective and essential principle in any democratic society, it is also a fundamental personal...
Prix 23,00 € / 46.00 $US
Plus d'infos
 Aperçu rapide

Reporting on elections - Council of Europe handbook for civil society... (2016)

Elections are a pre-condition for democratic governance since it is through them that the citizens of a country choose freely, and on the basis of the law, the persons that can...
Prix 21,00 € / 42.00 $US
Plus d'infos
 Aperçu rapide

Organisation of elections by an impartial body (Science and democracy... (2006)

After fifteen years of democratic transition in central and eastern Europe, the organisation of elections in conformity with the principles of the European electoral heritage is still a...
Prix 12,00 € / 18.00 $US
Plus d'infos
 Aperçu rapide

The way in which the media cover an election campaign is a topic of crucial importance, as the media are a major source of information and an important platform for discussion during...
Prix 7,00 € / 12.00 $US
Plus d'infos
 Aperçu rapide

The use of electronic voting systems has caused controversy in the media and among the general public, and has even come under the scrutiny of the law courts. It has become clear that the...
Prix 8,00 € / 16.00 $US
Plus d'infos
 Aperçu rapide

Digital solutions are increasingly used in elections. Their security has attracted much attention in the recent years as it impacts the integrity of elections. The legislator has the...
Prix Gratuit
Plus d'infos
 Aperçu rapide

Supervising electoral processes (Science and technique of democracy No. 48) (2010)

This publication contains the reports presented at the seminar entitled "Supervising Processes", organised in Madrid on 24 and 25 April 2009 by the European Commission for Democracy...
Prix 17,00 € / 34.00 $US
Plus d'infos
 Aperçu rapide

The cancellation of election results (Science and technique of democracy... (2010)

Electoral law, like all other fields of law, is effective only if it provides for sanctions. The cancellation of elections results, the most serious of sanctions, is in general linked to...
Prix 20,00 € / 40.00 $US
Plus d'infos
 Aperçu rapide

The European Commission for Democracy through Law, or Venice Commission, is the Council of Europe's advisory body on constitutional matters. It gives legal opinions on the development and...
Prix 39,00 € / 59.00 $US
Plus d'infos
 Aperçu rapide