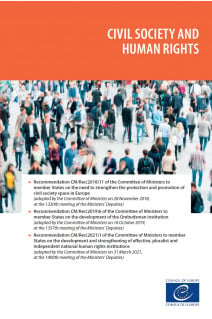 
 
The 47 member states of the Council of Europe, all of which are parties to the European Convention on Human Rights, have the obligation to ensure to everyone within their jurisdiction the rights and freedoms enshrined in that instrument, bearing in mind that these fundamental rights are universal, indivisible, interdependent and interrelated, and should be enjoyed by everyone without discrimination.

This obligation is shared: individuals, groups and organisations of civil society also have the right and responsibility to promote and protect universally recognised human rights and fundamental freedoms. In this context, the role of human rights defenders, the institution of the Ombudsman and national human rights institutions is crucial.

To reaffirm and strengthen this role, the Committee of Ministers of the Council of Europe has recently addressed three specific recommendations to the member states. They are included in this publication.
Recommendation CM/Rec(2018)11 of the Committee of Ministers to member States on the need to strengthen the protection and promotion of civil society
space in Europe (adopted on 28 November 2018 at the 1330th meeting of the Ministers' Deputies)
Appendix
I. National legal framework and political and public environment to protect and promote civil society space
II. National measures to protect civil society space
III. National measures to promote civil society space
IV. Support from Council of Europe bodies and institutions

Recommendation CM/Rec(2021)1 of the Committee of Ministers to member States on the development and strengthening of effective, pluralist and independent national human rights institutions (adopted on 31 March 2021 at the 1400th meeting of the Ministers' Deputies)
Appendix
I. Establishment of NHRIs
II. Strengthening of NHRIs
III. Securing and expanding a safe and enabling environment for NHRIs
IV. Co-operation and support