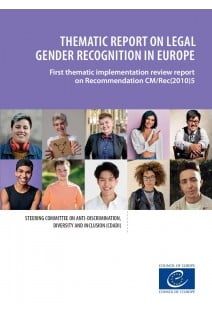 A new Council of Europe report reviews the progress achieved in European countries in guaranteeing full legal gender recognition (LGR) in all areas of life. The report acknowledges advances in legislation, practices and public attitudes, but progress is slow and additional steps are needed, inter alia, to “depathologise” legal gender recognition, as well as to ensure that family members of the persons concerned are not adversely affected and the children’s best interests duly taken into account.

This is the first thematic report on the implementation of the Recommendation CM/Rec(2010)5 on measures to combat discrimination on grounds of sexual orientation or gender identity focusing on the specific LGR aspect of the Recommendation. While support for rights of LGBTI persons, including the concept of legal gender recognition is firmly taking root in Europe, there are substantial differences between countries, the report reveals. 38 member states of the Council of Europe have a legal or administrative procedure to ensure legal gender recognition, and nine have a self-determination system. However, in some countries there is no clear procedure in place and others have rolled back existing protection by making LGR impossible. For some transgender, intersex and gender- diverse people this means having official documents that do not match their gender identity. This makes them more vulnerable to discrimination and violence. Another problem is the rise in opposition towards the human rights of transgender persons in some countries accompanied by a deficit of public information on their situation.

The report also makes some general recommendations. Equal treatment legislation should be accompanied by appropriate policy measures for its implementation and regular reviews. Member states which currently have no anti-discrimination legislation in place specifically protecting gender identity, should move towards introducing it. Motives linked to the victim’s gender identity or sex characteristics should be considered as “aggravating circumstances”.

The report has been prepared by a working group set up by the Council of Europe’s Steering Committee on Anti-Discrimination, Diversity and Inclusion (CDADI), with the support of the Sexual Orientation and Gender Identity (SOGI) unit. The next thematic report to be published in 2023 is expected to focus on hate crime directed against LGBTI persons.
INTRODUCTION
SECTION I – MAIN OBSERVATIONS
1. Public opinion and legislative trends
2. Anti-transgender discourse
3. Evolution of international legal thinking
4. State of play of national legislation in Council of Europe member states on Legal Gender Recognition (LGR)
SECTION II – GOOD PRACTICES
1. Self-determination
2. Age limits
3. Cost and duration of LGR procedure
SECTION III – CONCLUDING REMARKS: LGR-RELATED ISSUES FOR FURTHER DIALOGUE IN COUNCIL OF EUROPE MEMBER STATES
1. Moving away from the legacy of pathologisation
2. Removing divorce requirement
3. Making self-determination-based LGR accessible to children
4. Including non-binary/gender-diverse persons in LGR
5. Making LGR accessible to non-nationals residing in the country
6. Comprehensive approach to LGR and its implementation
SECTION IV – RECOMMENDATIONS
General Recommendations:
Legal Gender Recognition Specific Recommendations:
APPENDIX: KEY TERMS AND ABBREVIATIONS
Key terms
Abbreviations

Discrimination on grounds of sexual orientation and gender identity in... (2011)

Many people in Europe are stigmatised because of their sexual orientation or gender identity and cannot fully enjoy their universal human rights. Some of them are victims of violence,...
Prix 9,00 € / 18.00 $US
Plus d'infos
 Aperçu rapide

Combating discrimination on grounds of sexual orientation or gender... (2011)

The 1950 European Convention on Human Rights is crucial for the definition of the rights of lesbian, gay and transgender persons. The European Court of Human Rights has enshrined these...
Prix Gratuit
Plus d'infos
 Aperçu rapide

To this day, European societies remain largely unaware of the reality of intersex people. The classification of humankind into two categories, female and male, is omnipresent and informs...
Prix Gratuit
Plus d'infos
 Aperçu rapide