Protection and promotion of regional or minority languages: promising practices across Europe 2015-2020 (2021) 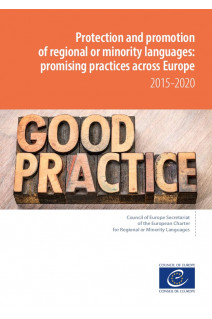 The minority languages traditionally used in Europe, including some of the 79 regional or minority languages covered by the European Charter for Regional or Minority Languages, are in danger of disappearing. Their preservation requires the will and determination of many public and private stakeholders: the speakers themselves, but above all the authorities in charge of language policies, as well as the bodies and services in daily contact with the public, such as public transport, medical services, schools, sports and cultural venues, banks and shops.

There are many initiatives in Europe in favour of lesser-spoken languages. They are undertaken at local or national level, but their examples are not sufficiently known beyond national borders. The aim of this publication is to make readers aware of what others are doing and what can work in their own language environment.

This publication contains examples of practices that could encourage different stakeholders to exchange and launch similar initiatives in other contexts. Europe’s linguistic heritage is presented as a living phenomenon, evolving with the times in the face of the digitisation of social links or the Covid-19 pandemic.
ACKNOWLEDGEMENTS
RATIONALE: SETTING THE SCENE
Methodology
What is meant by promising practice?
What are key factors of success?
How to transpose a practice
EXAMPLES OF PROMISING PRACTICES
Encouragement of multilingual tolerance and use of regional or minority languages by children and youth
Resilience of non-territorial language speakers
Revitalisation of languages and transfrontier co-operation
Face-to-face and online teaching for speakers and non-speakers
Digital culture
MANAGING AND WORKING IN REGIONAL OR MINORITY LANGUAGES
Advising public authorities on matters pertaining to regional or minority languages and compliance with the provisions of the European Charter for Regional or Minority Languages
USE OF REGIONAL OR MINORITY LANGUAGES DURING THE COVID-19 PANDEMIC
Online education
Covid-19 related information, health advice and individual support
PROMISING PRACTICES IN VIEW OF THE ACCEPTANCE OF THE EUROPEAN CHARTER FOR REGIONAL OR MINORITY LANGUAGES
Bilingual toponymy
Awareness raising of minorities and their languages as expressions of cultural wealth
ALPHABETICAL INDEX OF REGIONAL, MINORITY OR MAJORITY LANGUAGES AND GROUPS OF LANGUAGES OR DIALECTS MENTIONED IN THE BOOKLET

Safeguarding Europe’s linguistic heritage: Regional or minority languages are part of Europe’s cultural heritage and their protection and promotion contribute to the building of a...
Prix 21,00 € / 42.00 $US
Plus d'infos
 Aperçu rapide

The European Charter for Regional or Minority Languages is the European convention for the protection and promotion of languages used by traditional minorities. Together with the...
Prix Gratuit
Plus d'infos
 Aperçu rapide