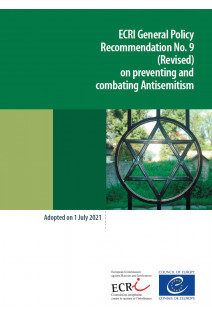 
 
The Council of Europe’s expert body on racism and intolerance (ECRI) has today published an updated General Policy Recommendation on preventing and combating antisemitism, to help prevent increasing antisemitism and attacks on Jews in many parts of Europe.

Noting that antisemitic acts are committed by a wide range of perpetrators, including neo-Nazis, political and religious extremists, ECRI’s Recommendation provides comprehensive guidance to governments on how to combat antisemitism in four specific areas:
• Policies and institutional co-ordination;
• Prevention and education;
• Protection of Jews, Jewish communities and their institutions;
• Prosecution and law enforcement.

Regarding protective measures, the Recommendation suggests that governments should ensure the protection of Jews, Jewish communities and their institutions by promoting their cooperation with local and national law enforcement and security authorities. ECRI also proposes improving co-operation with Jewish communities in order to determine and implement necessary security measures and ensure financial support.

Whenever tensions rise in the wake of any renewed violence in the Middle East, sweeping generalisations about all Jews and antisemitic violence also rise in Europe. ECRI points out that, all too often, insufficient emphasis is placed on the need to distinguish between legitimate criticism of the actions of Israel, to the extent that it is held to the same standards as any other state, and the public expression of racism and hatred against Jewish people in general.

In the field of prosecution and law enforcement, ECRI recommends that “antisemitic crimes committed online are punished just as crimes offline and are adequately addressed by means of effective prosecution and other measures. Illegal antisemitic hate speech must be removed promptly and consistently by internet service providers, in accordance with the relevant legal and non-legal framework.”

This book provides a detailed assessment of the first 15 years of the European Commission against Racism and Intolerance. ECRI's terms of reference deriving from the Vienna Plan of...
Prix 17,00 € / 34.00 $US
Plus d'infos
 Aperçu rapide

Recipes for educational work do not really exist, particularly not recipes of similar value for all European societies. Youth and social workers, youth leaders and teachers most...
Prix 13,00 € / 20.00 $US
Plus d'infos
 Aperçu rapide

The European Commission against Racism and Intolerance (ECRI) is a human rights monitoring body which specialises in questions relating to the fight against racism, discrimination on...
Prix Gratuit
Plus d'infos
 Aperçu rapide