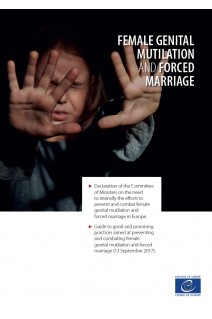 Female genital mutilation and forced marriage are human rights violations and grave forms of violence against women and girls. Since these violations often occur during childhood, they also constitute a violation of children’s rights. The fight against these practices is founded on a rightsbased approach and an integrated policy which addresses the larger systemic issues at play in society that breed such forms of violence, gender inequality and discrimination.

The Declaration of the Committee of Ministers on the need to step up efforts to prevent and combat female genital mutilation and forced marriage in Europe calls on member States to fully recognise these practices as human rights violations which concern European States, and to this end to develop national action plans and strategies, and to promote exchanges of practices in order to fight against these human rights affronts.

The Guide to good and promising practices aimed at preventing and combating female genital mutilation and forced marriage aims at providing strategic guidance on the standards, principles, features and characteristics of the necessary integrated response to end these practices. In support of these elements the Guide also outlines selected current initiatives being taken by a number of Council of Europe member States in preventing, combating and addressing the effects of female genital mutilation and forced marriage.

► Declaration of the Committee of Ministers on the need to intensify the efforts to prevent and combat female genital mutilation and forced marriage in Europe.

Council of Europe Convention on preventing and combating violence... (2017)

The Council of Europe Convention on preventing and combating violence against women and domestic violence, also known as the Istanbul Convention, entered into force on 1 August 2014. It...
Price Free
More info
 Quick view