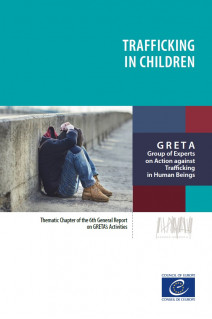 
 
According to national statistical data reported to GRETA, 4361 children were identified as victims of human trafficking in 12 States Parties to the Convention between 2012 and 2015. On average, children represented a quarter of the identified victims of human trafficking, but there were important variations between countries. Data and research show that children are being trafficked transnationally, as well as internally, for different forms of exploitation (sexual exploitation, forced labour, domestic servitude, forced begging, forced criminal activities, forced marriage).

GRETA decided to pay particular attention to measures taken by State Parties to address the vulnerability of children to trafficking. Based on the findings from its second round country evaluation reports published by the end of 2016, GRETA dedicated a thematic section in its 6th General Report to the issue of trafficking in children.
EXECUTIVE SUMMARY
INTRODUCTION
TRENDS REGARDING CHILD TRAFFICKING
PREVENTION OF CHILD TRAFFICKING
Awareness raising, education and training
Targeted prevention for children at risk through social, economic and other measures
Children not registered at birth
Children in street situations
Children placed in institutions
Children from disadvantaged communities
Unaccompanied or separated children and irregular migrant children
Border measures
MEASURES TO PROTECT AND PROMOTE THE RIGHTS OF CHILD VICTIMS
Identification
Guardianship
Age assessment
Protection of the private life and identity of child victims
Assistance
Recovery and reflection period
Residence permits
Compensation and legal redress
Repatriation and return
PROTECTION OF CHILD VICTIMS AND WITNESSES BEFORE, DURING AND AFTER JUDICIAL PROCEEDINGS
NON-PUNISHMENT PROVISION
CONCLUDING REMARKS

Compendium of good practices on the implementation of the Council of... (2016)

Trafficking in human beings is a violation of human rights and an offence to the dignity and integrity of the human being. The Council of Europe Convention on Action against...
Price Free
More info
 Quick view

Assistance to victims of human trafficking (2019)

Human trafficking for the purpose of labour exploitation (2019)

2017 saw the adoption of the landmark judgment of the European Court of Human Rights in Chowdury and Others v. Greece, in which the Court found for the first time a violation of Article 4...
Price Free
More info
 Quick view

Council of Europe Convention on Action against Trafficking in Human... (2013)

This Convention aims to prevent trafficking in human beings, protect victims of trafficking and prosecute traffickers. Its comprehensive scope of application encompasses all forms of...
Price 8.00 € / 16.00 $US
More info
 Quick view

Council of Europe Convention on Action against Trafficking in Human... (2014)

Council of Europe Convention on Action against Trafficking in Human Beings - Monitoring mechanism The Convention provides for the setting up of an effective and independent...
Price Free
More info
 Quick view

Council of Europe Convention on Action against Trafficking in Human... (2014)